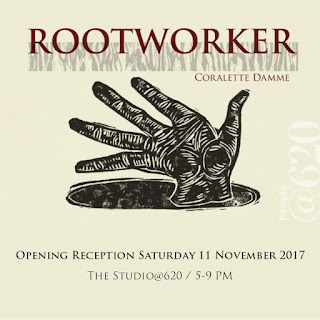 My solo exhibition was a wonderful experience... ROOTWORKER was about my connection to nature and my ancestry and mystic forces and just being a part of something bigger than myself...

Upon entering the gallery the viewer would pass thru a curtain of organic shapes containing symbolic blessings for health, prosperity, comfort and all good things; the idea being that when entering the space you would absorb these positive aspects in preparation for viewing the art and it gave a magical air to the space for sure.  There was a central pedestal containing specially crafted candle votives made from natural beeswax candles and hand collected snail shells from a Florida marsh.  The candles were lit during the opening and gave the gallery that churchy smell with burning offrendas.
The idea of  a candle held by a shell was something that came to me in a dream and I had to make it reality.  Surrounding the pedestal were several rock cairns representing one's search to know oneself and as path markers as one travels looking to understand life's mysteries.  Around each cairn were smaller circles of light and dark stones representing the phases of the moon. 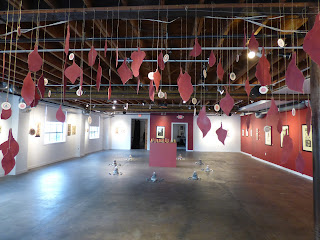 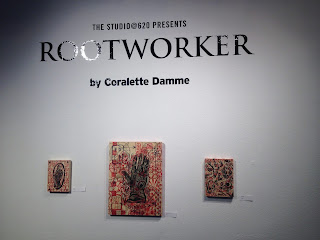 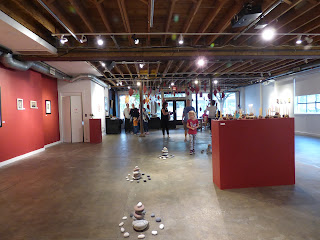 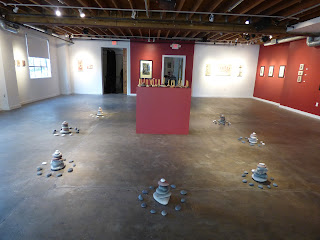 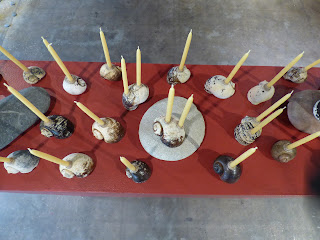 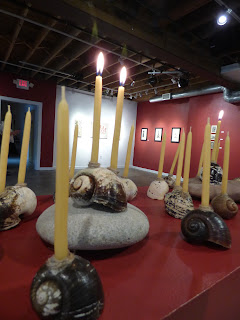 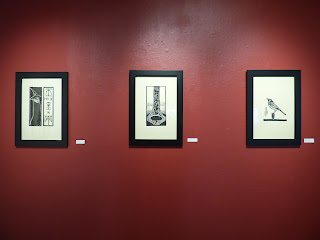 A table at one end of the gallery had a special wish station where a guest could make a  charm of attraction using licorice root and themselves then be a rootworker also. 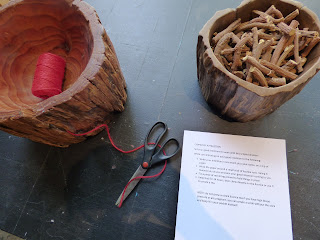 Many of the artworks contained runes, foreign words and other symbols.  Here are some brief explanations for a few of the larger works.... 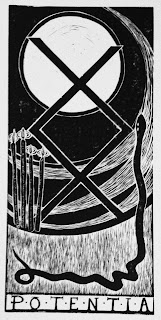 POTENTIA
The Latin POTENTIA is intended here to mean POTENTIAL but it can also be translated as power.  The rune in the image is Inguz, associated with a new beginning or growth as well as the energy and motivation to start on a new project. The snake represents transition, flexibility and growth as a snake moves fluidly and is refreshed as it sheds its skin.  This was the first image created for this exhibit and reflects the artist’s hope that embarking upon this creative journey she will realize her full creative potential. 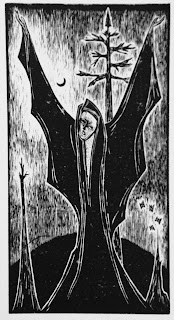 THE SHAMAN
A shaman traditionally is a healer. Here the shaman is breathing life back into a wilderness, illustrated by the emerging butterflies. You’ll see her robes emerge from the earth the same as the trees implying she is part of nature. The large tree behind the shaman provides her strength and forms an arrow reaching skyward. The rune Tiwaz is shaped like an arrow and represents success in battle, strong motivation, strength and will power.  It can also denote self-sacrifice and responsibility. The shaman illustrates our shared responsibility to each care for nature and fight for its health and conservation.

HUMILIS
The Latin HUMILIS means HUMBLE or HUMILITY. The rune shown is Othila which represents inheritance including knowledge or customs of ancestors in addition to material things. It can also refer to making your mark on history.  The skull can be seen as homage to those who have gone before us or our own eventual fate, either way spawning and supporting new growth and fertility after we’re gone. 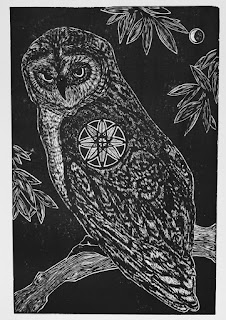 THE OWL
The great owl sees things clearly in spite of darkness and moves silently with confidence. On his shoulder is an eight pointed star hex sign which is a design of good fortune.  For the artist the owl shows the ultimate goal of living successfully by utilizing fully one’s natural gifts.

A sample of other works that were included in the exhibit: 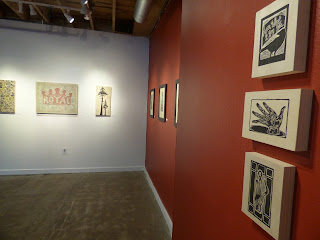 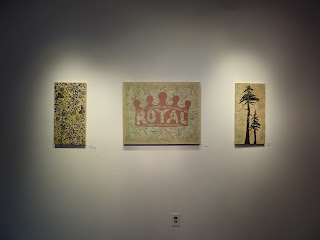 SPECIAL THANKS to the St. Petersburg Arts Alliance and PAVA for grant funding which helped make this exhibit possible and to The Studio@620 for saying YES.


Posted by Coralette the Crafty Hag at 11:26 AM